“They need to get out of our lives, they need to give us the money that they spend keeping us oppressed.”

“They need to get out of our lives, they need to give us the money that they spend keeping us oppressed.”

Julia Whaipooti’s online discussion with Stacey Morrison was inspiring and thought-provoking – and near the end, came a supportive message from attendee Prof Tracey McIntosh in the chat box: “Moana [Jackson] knew that there was so much mahi to be done but was so heartened that Julia and other young people have the power and the aroha to create real positive change for our people. Big love Julia. Speaking your truth, speaking our truth.” 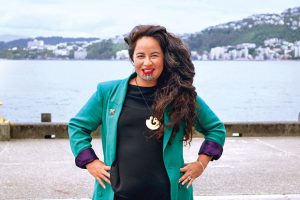 It was a special moment – Julia (Ngāti Porou) and Tracey (Tūhoe) served together on the 2018-19 government advisory group Te Uepū Hāpai i te Ora, and Julia had already talked about how influential both Tracey and Matua Moana have been on her own thinking around prisons and the Matike Mai constitutional transformation project.

“Constitutional transformation” is a mouthful – it’s “kupu [words] just chucked out there” as Julia says. So, to explain the phrase, she used concrete examples of the problems Matike Mai is designed to stop: colonisation and structural racism. Even if she were in charge of the police, she said, the police would still not transform “to be of service for our whānau”. Or “I could be every single social worker in Oranga Tamariki – every social worker could be Julia Whaipooti – and it would not change the hara [deep harm] of that system and processes,” she said, acknowledging with a smile that “it would be a bit better, guys, I would make it a bit better!” before underlining that “at the heart of it, it wouldn’t actually change things.”

And the reason? “You can’t have a racist pakuru [broken] car and just change the driver of it, or just change the passengers in it. […] We can make it less shit […] we can cause less harm in those processes but we are not of those processes” – in other words: Māori processes and structures are required for Māori, instead of Pākehā government processes. “It is not about tutuing [tinkering] with a system that does not work and is not of us [or] for us, but does stuff to us. We can’t just tutu with it […] Our solution will never be in the kawana [the colonial government].”

Instead, Julia says, what Māori need is for the kawana “to minimise their role; they need to get out of our lives, they need to give us the money that they spend keeping us oppressed.” The current system is intolerable. Government agencies “might name themselves a Māori name, they may have the Treaty of Waitangi in all their policies or they make a Māori roll – but will they give resource over to Māori, will they trust Māori to do the work that they have not been able to do and can’t do? No, they don’t. That’s a reflection of a lack of trust in Māori. That still happens today. There is an inherent distrust in our ability to serve our own people. […] That’s how racism and white supremacy lives on.”

Julia is clear those phrases – racism and white supremacy – are not only correct descriptions of ongoing colonisation today, they are also the most appropriate. “Using those words – people are incredibly challenged by that, but if we don’t confront it then we can’t address it. […] Nothing will change unless we activate, and push for those changes.”

And that is what Matike Mai is about: it puts forward a Māori decision-making sphere alongside a kawana sphere, with some interaction. “The constitution is really just a foundation of relationship, it should be a tikanga, a set of rules of how we should relate to each other. It comes down to power, who has the power and how decisions are made.”

Prisons are a key part of the system of “white man’s law” and oppression – Julia reminded us that every two years, the government spends as much on incarceration as it has done on all the Treaty settlements put together – a point also made by Laura O’Connell Rapira in her forum.

Julia is an abolitionist, describing prisons as “very limited” and “munted”, as “places that fester harm”: “There is no place for prisons for Māori or Non-Māori […] which is very different from saying there’s no place for accountability.” Instead, the community should be part of the accountability, as in tikanga Māori, rather than separate from it: “how foreign it is that you have prison structures [… where] the punishment or whatever is to sever someone completely from the world they’re accountable to, the relationships, the connections,” she says.

Acknowledging relationships; holding each other accountable – Julia’s approach to both kawana and community is consistent – and powerful.