Her remedies for our unequal society

Matching hope and humour with clear-eyed analysis of New Zealand society, Tracey McIntosh (Tūhoe) was a warm inspiration at AWC’s last event for 2019. In front of a sold-out crowd at the light and airy West End tennis club, the Professor of Indigenous Studies talked about what’s needed to eliminate state and personal violence: radical honesty about our society, imagination to conceive of different ways of doing things, the ceding of power from state to hapū, and truly honouring all our children and tamariki as valuable rather than vulnerable. Paula Penfold very capably stepped in at the last minute as the evening’s accomplished moderator as Stacey Morrison couldn’t attend, due to the passing of theatre giant and wahine toa Nancy Brunning.

Having researched Māori incarceration for several years, Tracey honoured the prisoners she sees weekly at the women’s prison in Wiri for their “astonishing insight and wisdom”: “I have certainly learned far more than I have given – there’s no humbleness there, it’s just fact.” Prisoners have described everyday humiliations imposed on them as children when in state care, such as being placed in homes where kai cupboards were kept locked.

Tracey on… our current mess

Being on the receiving end of structural harm means the prisoners are experts on our shared collective condition, says Tracey, so legislators would be wise to heed their views in order to change broken systems. “When something goes wrong in one of our systems, journalists will always ask me: ‘should “XX”’s head roll?’ As if it’s not the system or the structure that’s at fault.” In Tracey’s opinion, it’s most definitely the structure that’s at fault. In Oranga Tamariki, she says, we have “good people working in bad systems.”

As well as valuing the expertise of lived experience, Tracey believes we need to exercise our imaginations to dream up a better world. “If I say to a class of students: “imagine we close the prisons tomorrow, people on the whole find it impossible to do. The prisons are so monolithic in our imaginaries that we can’t see around, or under them.”

As influences in her own life, Tracey paid tribute to wāhine Māori academics such as Ngahuia Te Awekotuku, Margaret Mutu and Leonie Pihama as well as her parents, Lorna and Eric McIntosh. She grew up proud of her Urewera turangawaewae and whakapapa: “It was a shock to me that not everyone wanted to be Tūhoe,” she said, adding with a smile: “it’s still a shock to me today, to be honest!”

Tracey on… what needs to be done

For Tracey – who in the late 1970s worked with Lorna to convince Eric he needed to vote for the ban on girlie calendars in the workplace rather than just abstaining – mana wahine is power and authority that connects to mana tane, and to mana tamariki. It doesn’t sit separately on its own: “it’s that sense around what the collective means.” She remembers a seminal feminist awakening when she was 13, thanks to visiting an elder cousin’s flat in Dunedin in 1973: a poster on the wall read “a wolf whistle is the first step towards rape”.

In one of several lighter moments, Tracey described waitressing at the airport (“I loved that job”) and meeting a French couple there.  “They said I had no culture, and their remedy was for me to go to France. I gave it five minutes consideration and thought ‘yeah, I’ll do that.” She was still only 17 when she landed in Europe, and she was soon teaching English. “It was quite a shock to me to find out English had a grammar.”

Later, travelling to Burundi and Rwanda as an aid worker made Tracey realise she needed an education, and gave her an understanding that violence was a characteristic of colonisation – both overseas and in New Zealand.

She said it’s best to be generous towards those who are resistant to change out of fear they will lose something; who are wilfully ignorant because they do not believe it is in their interest to know. “How do you work with people to create the sense that it’s in the broader interest to create those conditions of change? Again it’s really complex and challenging but we can absolutely do it.”

Tracey on… reasons for hope 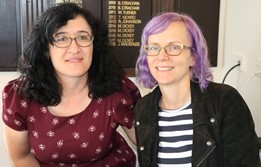