Laura O’Connell Rapira: Our work must be values-based

A long-term vision for our earth mother Papatūānuku will help create the best future for wāhine Māori and for all of us, said Action Station director Laura O’Connell-Rapira at Auckland Women’s Centre’s latest community forum.

Laura delivered her inspirational kōrero to nearly 100 participants in the first-ever online AWC forum, which went off without a hitch. Audience members sent in questions via the text-chat function which forum chair Stacey Morrison (Ngāi Tahu, Te Arawa) then asked Laura; and both Laura and Stacey expressed warm pleasure at seeing audience faces via video.

Laura – whose parents are both Māori and whose whakapapa includes Te Ātiawa, Ngāpuhi, Te Rarawa and Ngāti Whakaue – advocated for core Māori values of whakapapa, rangatiratanga, manaakitanga and kotahitanga to be guiding government decision-making.

Ensuring whānau, hapū and iwi have the decision-making power and resources to look after all their members

“The first value is whakapapa – which is the long and never-ending line from the atua [gods] to the whenua to our tūpuna to us to our descendants,” said Laura, who linked this concept to long-term planning which bears in mind the generations to come. She continued: “[W]hat that means is: All political and economic decisions should be made with the health of Papatūānuku, our earth mother in mind first.”

In practice, this would mean prioritising regenerative farming over intensive agriculture, and free public transport over more motorways, but it also means widening what we considered to be linked to Papatūānuku to “investing more in low-carbon jobs like caring, healing, teaching, nursing, gardening.” Most of the low-carbon occupations listed by Laura are overwhelmingly held by women, demonstrating an overlap between centring whakapapa and centring women in decision-making.

Laura asserts that the value of whakapapa would also guide politicians – trapped in a three-year electoral cycle that encourages short-term thinking – to devolve “more of their decisions and responsibilities to communities, hapū and iwi who have roots in the communities they belong to and can deliver long-term projects better than a central government can.”

This devolution also supports the second principle of rangatiratanga, or leadership (by “weaving” people together), which evokes tino rangatiratanga (self-determination). This would involve the Crown “living into the promise of Te Tiriti o Waitangi by sharing power with Māori” including “making sure whānau, hapū and iwi have enough resources to care for whānau, hapū and iwi in a way that works for them”. Laura then pointed out that what the Crown has spent in the entire 30-year history of Treaty reparations (settlements) is only one sixth of what the government has spent on the COVID19 wage subsidy over the past couple of months, or less than two years of prison funding.

Caring for whānau, hapū and iwi is also part of centring the third value of manaakitanga, the act of uplifting someone’s mana: “It is the idea that people won’t always remember what you say, but they will remember how you made them feel.” If the current COVID recovery efforts were guided by manaakitanga then we would be “doing all we can to make sure everyone has a warm house, good health and good food and a secure income.”

The fourth value is kotahitanga: bringing people together for unity. “Over the last couple of months I think our team of 5 million in New Zealand has displayed incredible kotahitanga… but I also think the more complex challenges are yet to come.” Laura cited conspiracy theories, such as those against vaccines, as threats against vital consensus; but she suggested these threats can be reduced through increasing equity, belonging and inclusion.

For example “one of reasons people do not trust information from experts about vaccines is because they themselves have had experiences of not being trusted by experts or health professionals.” The “system” must listen, if it wants to be heard.

All up, these four values can help create “a society based on listening and trust and whanaungatanga. Power sharing and aroha.” 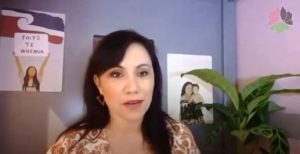 And how far away are we from making this vision reality? Laura found Budget Day very disappointing – “I had thought that our semi-progressive govt was going to … do something more transformative” and she pointed to our long history of “people who wish to hold on to power or grab power using their platforms to dehumanise people on benefits” as a barrier. But she found hope in recently seeing Tā Mason Durie speak about constitutional transformation “like we are almost there”. For example, it is now possible to be educated entirely in a Kaupapa Māori system from kōhanga reo to tertiary wānanga. “That exists because years ago ordinary nannies and aunties and uncles came together to pass on their learnings to the next generation and then it grew.”

Would Laura ever consider entering parliament herself? No, she laughs, “it’s a bit too bureaucratic and a bit too ‘Crowny’ for me!” But, she stressed, there’s more than one way to be political. Her prescription for political disappointment? Ordinary people coming together to do extraordinary things.

How Tauiwi (non-Māori) can support decolonisation