A kōrero with Dr Hinemoa Elder was an evening of sharing stories, Indigenous wisdom, and the joy of being together as women. “Incredible women celebrate incredible women!” as chair Stacey Morrison (Ngāi Tahu, Te Arawa) put it.

Hinemoa invited us on a voyage of discovery to Antarctica, a voyage she actually took three months ago with 99 other women scientists from around the world. Hinemoa loved being alongside so many women, and it reminded her that her tūpuna wahine had mechanisms in place to get together on a regular basis. “So let’s reclaim this… we [women] really need to hang out together more!”

That “extraordinary” voyage jolted Hinemoa to speak out about what she described as a “new kaupapa for me”: the climate emergency, which inequitably affects women as a group due to their higher caring responsibilities and lower incomes. Her discussion was serious but inspiring, and her message was: the world’s 500 million Indigenous people might be relatively small in number but they are essential to an effective response to climate change (see box next page). “It’s actually about returning to the role of kaitiaki.”

A key way to show to ourselves we’re connected to the land is via storytelling. “With all these women scientists, we were in absolute agreement that science alone isn’t going to save us. That data alone is not going to save us.

“The numbers are necessary but not sufficient. It’s like telling people: don’t smoke because here’s all the facts about what smoking does to you. It actually doesn’t change peopl

e’s behaviour. … Human beings don’t operate like that. So why do we keep perpetuating this false logic that ‘oh if we just tell people facts, they’ll change [because] we have loads of evidence?’ That’s not effective. The stories are the effective part.  And it was interesting to me that these hard core, what I would call hard core, women scientists were all about that.”

Hinemoa used the pepeha (self-introduction including iwi, hapū, maunga, awa or moana, waka, and tūpuna) as an example of a powerful storytelling “technological invention by our old people” that remains relevant. “It’s a bit like a Māori Da Vinci code, because it unlocks a whole lot of secrets,” she said. “Iti te kupu, nui te korero [the words are few but the message is profound]. Within pepeha, you know we say the names of these places and we’re invoking the layers of stories – the hairs go up on the back of your neck.”

Indigenous wisdom includes how to care for the environment – and how to persuade others to care too.

Hinemoa’s whakataukī for this kaupapa is “Tini whetū ki te rangi, he iti te pōkēao ka ngaro” (“a small cloud overhead will obscure the stars”) which can be taken to mean “we, the few, can overcome a myriad of difficulties”.

Stories are effective: “Data alone is not going to save us”

The emotional power of stories – the traditional vehicle for transmission of Indigenous wisdom – shows people why they should care. Hinemoa: “It is our stories, the meanings and the trust that telling those stories begins to build, that will inspire us do whatever it takes to restore our celestial waka, that is, Papatuanuku.”

Action springs from aroha: “A fierce protective vibrancy and wisdom”

Hinemoa: “Aroha is a complex concept… For me, this heart, this unashamed emotional caring energy, is the missing element for action, and that’s what we as Indigenous peoples bring. It’s a divine wellspring. So I invite you to connect with your ancient ancestral aroha, your female aroha, and really step up to that challenge, to return to our roles as kaitiaki.”

Hinemoa referred to the Australian bushfires: for many years, Indigenous groups “have been trying to share what they know and the Australian Government has not been listening, and look what happens.”

Hinemoa descends from Muriwhenua tribes of the far north – Te Aupōuri, Ngāti Kuri, Te Rarawa – as well as Ngāpuhi, and her pepeha makes her think of the kuaka (the incredible migrating godwit) of the far north, as well as her tupuna wahine called Muriwhenua. Because it links the speaker so strongly to the land, Hinemoa says “I think the pepeha is a key way of getting back to this identity of being kaitiaki.”

But Hinemoa also pointed out that racism exacerbates the problems of climate change by keeping indigenous voices out of scientific discussion even though “it’s unscientific to dismiss our body of knowledge, to dismiss our way of knowing.” One classic example of erasure was the Antarctic voyage’s history presentation: it did not include any indigenous explorers such as the 7th century’s Ui-te-Rangiora who described his voyages in the place of ice.

Later, discussion turned to Kaupapa Māori health and education systems, and  whether or not Māori should shun mainstream services. Hinemoa agreed that the message of Pākehā-designed hospitals is “just leave your Māori stuff at the door, and pick it up on your way out”, but she thinks both systems need to be made to work for Māori. “We have to create safe places for Māori in the mainstream system. … [at the same time as] creating Māori health structures that really resonate for our own.” And Pākehā systems shouldn’t be able to get out of catering for Māori – particularly as Māori services are often woefully underfunded. 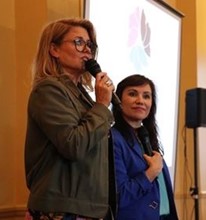 Both Hinemoa and Stacey were warm and relaxed, although Hinemoa readily admitted to a few nerves because she was speaking about such an important topic. She suggested we could reframe a

“sore puku” and feeling “wobbly” as signs that we are passionate about speaking out. “When things feel uncomfortable, it doesn’t mean you shouldn’t do it, it actually probably means you should do it more.” Stacey summed it up with a whakataukī: “Tūwhitia te hopo mairangatia te angitū!” (Loose translation: Feel the fear and do it anyway!) “Ae, pono!” agreed Hinemoa.

Stacey also asked about Hinemoa’s moko kauae, the traditional tattoo reserved for Māori wāhine, and how she felt during the process of getting this moko on her chin. “It was extraordinary,” said Hinemoa. “James Webster did it, a tohunga of karakia. He sent me to another realm. So at one point I did feel like I was under the ocean…. People say ‘out-of-body experience’ but I was in my body, but I was floating around. It was amazing.”

And the response to her moko kauae has been overwhelmingly positive: some people have run across the street to hug her with delight.

… our connection to the earth