Home. A little word that – unsurprisingly – held a lot of meanings in Debbie Ngarewa-Packer’s online kōrero with Stacey Morrison late last month. Being home, Debbie said, is “where you feel safe.” And “de-masking, de-armouring” in the safety of home – after a tiring stint at Parliament – is replenishing: it’s “doing nothing, being out amongst the silence, wearing trackies and not brushing your hair for a week!”

Home for Debbie is South Taranaki – she lives with three generations of whānau, on tupuna land which is back with the whānau for “probably the first time in 170 years.” But her whānau “has always been ahi kā” – the wāhine especially have kept the fires burning of continuous occupation, despite extreme attempts to stamp them out. (Even before the violence that met the passive resistance of Parihaka, 74 tāne, including Debbie’s great grandfather, were shipped off to Dunedin as the Pakakohi prisoners in 1869 for resisting land confiscation.)

Ahi kā, says Debbie, is one of her “greatest strengths and privileges” but it comes with “a responsibility, an obligation … you grow into it.” For Debbie herself, that responsibility has meant fighting against “kaupapa that were threatening our kai, they were threatening our wellbeing, our ability to have certainty, to live calmly and uninterrupted.” As Ngāti Ruanui CEO, she has led the fight in the courts to stop seabed mining, “an atrocious activity.” As deputy mayor for South Taranaki, she fought “to stop the pollution in our awa.” She has also fought to have Māori wards recognised, and to stop “our babies being advertised on TradeMe.” It was the feeling of meeting dead ends in many of these battles for home that propelled her all the way from Taranaki to Parliament: “every road kept leading to this place.”

Her tupuna – who faced so much – give her the strength and courage to carry on. “Can you imagine saying good bye to 70-plus of your immediate hapū and they never came back? … our women had to lead through that…. That’s where we intrinsically dig in from.”

For a little while, as a young woman, Debbie says she was ashamed of what had happened to her people. “How the hell do you hold your head up, where do you go, when you learn that your ancestors were raped, they were left hapū, when they were being removed from Parihaka, …where do you put that as a young woman coming through teenangehood and dealing with her own womanhood?” But whaea Whero O Te Rangi Bailey – then a teacher at Debbie’s school – helped her through: “She was a real feminist, ahead of her time, and she made me own that: this wasn’t our whakamā. Our wāhine survived that and they stood up and they continued to bring whakapapa into us, and we grew, and we grew.” 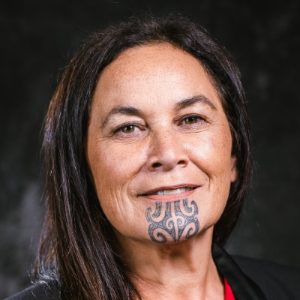 Growth, movement, change: they’re themes in the kōrero, not in contrast to home, but as part of it, just as Debbie herself moves and changes, as part of a larger story, bridging from tupuna to mokopuna. “I was a bridging CEO in iwi to bring the next generation through…, and I’ll do that in politics as well. Just bring them through and make them realise: this is our space, tangata whenua, tangata tiriti, tangata moana. And don’t ever let them think that it’s not. Own our space.”